Sam Walsh and Laurie Whittaker from the historic fabric house Brunschwig & Fils visited Chrissie in the London showroom with their beautiful new collections for Spring 2014.

Brunschwig & Fils was originally established by Achille Brunschwig in 1900 as a tapestry weaving mill in Aubusson, France. In 1925 his son Roger Brunschwig opened an office in New York. Since then their wallcoverings and furnishings in the French style have appeared in some of the world’s most beautiful interiors.

Searching through the archives, the Brunschwig studio has selected authentic Toiles de Jouy documents and revived them to work in contemporary interiors. Coordinating wallpapers allow these toiles to be used throughout a room in the traditional manner. These graceful toiles were first printed in the 18th Century using finely engraved copper plates and for the most part depict idealized scenes of country life. Included in the collection are a range of complementary weaves; a rustic stripe, an ikat patterned tapestry and three unique embroideries as well as some new hand woven cotton checks. 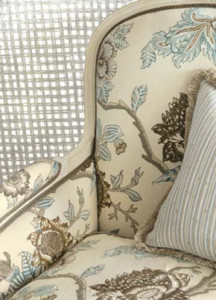 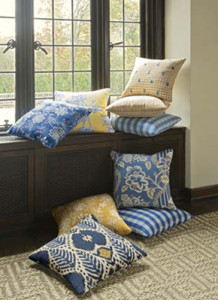 The new Hommage collection celebrates the revival of a selection of the best prints from the 20th Century together with some stunning new weaves. Now given a palette of contemporary colours, patterns such as Edenwood, re-imagined as a block-printed linen, blooms again 35 years after it was first introduced. Proof that good design is forever. Sumptuous silks, linen blends, velvets and a single graceful embroidery complement the prints and make strong statements on their own. 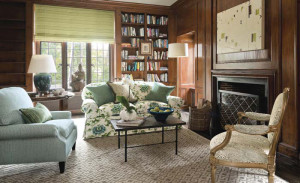 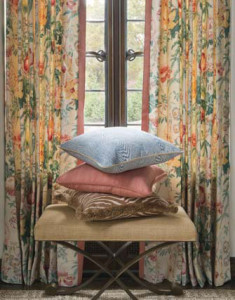